Dendrobates: A comprehensive study of behavior in a community with 5 species of poison dart frogs. 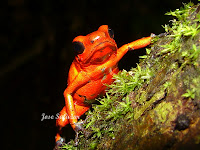 Some of the species of frogs of the Dendrobatidae and Aromobatidae families show bright warning colors associated with the high level of toxins in their skin, while others have cryptic colors. In addition, most of them are characterized by aggressive behavior for defending their territory.
Due to the immense diversity of diurnal frogs from the Dendrobatidae and Aromobatidae family in the reserve, this project attempts to understand how a community of 5 species of these frogs interact. The project aims to determine the peak activity of each species, the sizes of the territories of each species, the overlapping edges of the acoustic interferences between males of the same and alternate species, as well as to analyze whether there are other types of interaction within and between species.

This project will be divided into several aspects in order to deal with each species separately.  Work will be done simultaneously to overlap the data generated for each species in an attempt to understand the behavior of a community of frogs.
Posted by veragua at 13:41