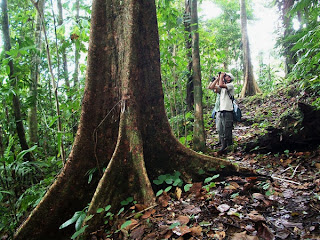 Number of Participants: There are 54 participants.

Christmas Bird Count is called because it is carried out mainly in the month of December.
Before 1900, groups of people gathered on a holiday to celebrate the tradition of going to the countryside to hunt for animals, including birds. The winner was the one who brought the largest number of dead animals.

The conservation was just beginning then, and many birders became concerned about the indiscriminate killing of wildlife and the decline in bird populations. On Christmas Day 1900, ornithologist Frank Chapman, who was part of the National Audubon Society at that time had barely begun, called to end the slaughter. He suggested that instead of shooting birds people should count the birds. So this is  how it began the Christmas Bird Count.

Thanks to the inspiration of Frank Chapman and the enthusiasm of 27 birders, 25 Christmas Bird Counts were held that day.

Today there are about 2000 circles in America and involved approximately 50000 bird watchers every year.

Our country has been well represented by counts carried out at various points, we hope that with the help of all participants we can carry out our first Christmas Bird Count successfully.

Importance of the Bird Counts

Educational Purposes: We are engaging landowners, students, teachers and anyone who is interested in birds and want to learn a little about the subject.


Research: The results of the count we will have to provide it, year after year, valuable information about the behavior of bird populations in general and especially the status of species threatened or endangered.
Counting Methodology

Participants will be divided into groups of 2 to 4 people and will cover specific routes located within the Circle, previously assigned by the organizer of the event. One participant will be the leader, the organizer will distribute a list of birds that are known within the circle, where the leader will take note of the number of species and individuals observed during the day. They can also include species identified by the sound of the  song, as long as the group leader approves it .

The leader is the person of greater experience and knowledge in the field of birds, however all participants play an important role in species and help spot the leader, in some cases to identify birds.

In the list of birds are some species marked with an asterisk, these species are rare, in these cases the leader must file a report that will be submitted along with the listing. Will also have to file a report if you see any bird that is not on the list.
Objectives Count

The main objective of the Christmas Bird Counts is to monitor the status and distribution of bird populations in the area.
At the local level help us:

Participants:
These are some of the renowned participants who have confirmed to count birds:


Alex Villegas, more than 20 years of birding in Costa Rica and representative of Swarovski Optics.


Other well-known birders in the country: Paco Madrigal, Ernesto Carman, Alfred Scott, Gustavo Flores, Pieter Westra, Joel Alvarado, Yehudi Hernandez, among others.
Listen
Other Birdwatching Christmas Counts in Costa Rica
Other research centers or private companies who have been making an effort to coordinate these counts are:
La Selva Biological Station, for  25 years
Monteverde, for over 20 years
Tapanti Carthage, more than 15 years
Aerial Tram Pacific and Atlantic, for 9 years
Perez Zeledón,  Fila Coast for 9 years